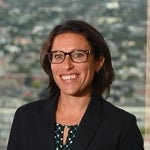 Esther knew that she wanted to be a lawyer at an early age. She spent several post-undergraduate years in New York City, doing research and working on policy issues for various elected officials and political candidates. In 2007, Esther returned to New Orleans to attend Tulane Law School, where she realized that family law was her passion.

Esther practices family law primarily in Orleans and Jefferson Parishes, where she's obtained numerous no-fault and fault divorces, and tried multi-day custody and protective order cases, as well as those involving support and property issues. She is inspired by her clients, and relishes presenting arguments before Domestic Hearing Officers and Commissioners, and District Court Judges.

Esther remains a steadfast advocate for her clients because she cares deeply about helping people navigate the emotionally difficult and often complicated processes attendant to divorce, custody, property and occasionally domestic abuse litigation.

Esther recently presented a talk at about same-sex marriage in family law during a Continuing Legal Education (CLE) seminar. She was selected as a top Family Law Attorney by New Orleans Magazine for 2022; and, she is a proud member of the Loyola Law Family Law CLE Committee.

When she is not practicing law, Esther enjoys spending time with her wife and two dogs, volunteering at Animal Rescue New Orleans, a no-kill animal shelter, running in City Park, listening to live local music, seeking out delicious vegan food, and, traveling to new and interesting destinations.

Esther is licensed to practice law throughout the state of Louisiana.

Thank you for contacting us. We will get back to you shortly.

Please complete all required fields below.

Esther L. Greenbaum, LLC Is Here for You

At Esther L. Greenbaum, LLC, we focus on Family Law, Divorce Law, Child Custody, Child Support, Spousal Support, Community Property Partitions and Protective Orders and we are here to listen to you and help you navigate the legal system.

We'll gladly discuss your case with you at your convenience. Contact us today to schedule an appointment.